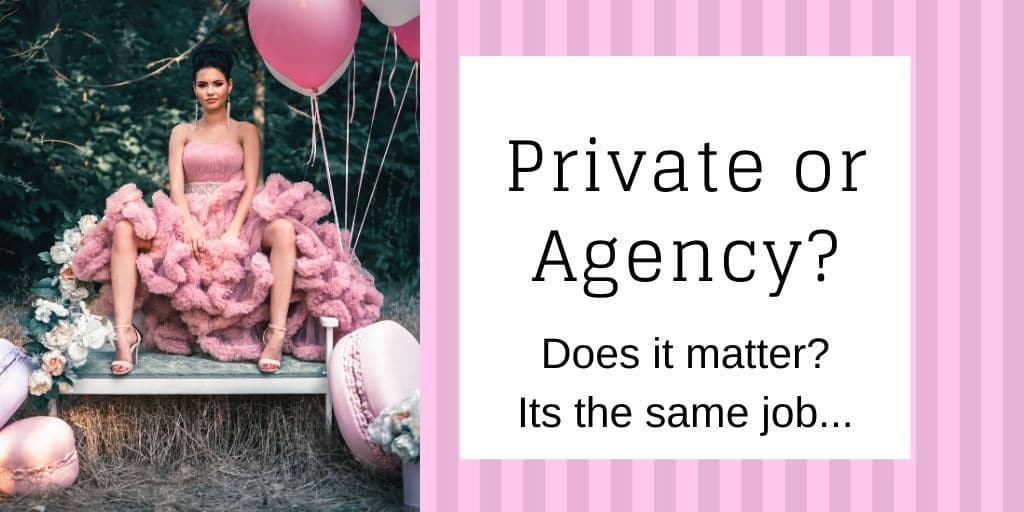 Who cares as long as it’s honest?

When I started my Escort Agency, Agency Atlantic in London almost 2 decades ago, there was a few online escort agencies (maybe 10 or so) and maybe 2 or 3 private Escorts with their own websites.

We didn’t have social media, there was no Adultwork or LEG. There were online bulletin boards (similar to Backpage), Top 100 sites, Captain69, Punternet and a few other sites that are not longer around

We advertised on the Internet as well as print media; places like Big Colour Pages & the Herald Tribune Newspaper

Back then just like now, escorts were identified as either an Independent Escort or Agency Escort in Australia Independents are often referred to as Private’s or Private Escorts

An escort agency is similar to other types of agencies (acting, modelling, literary, sports). They usually have a client base, website, admin/support staff and industry experience

Some Agencies are friendly, professionally run businesses (like Atlantic), some are draconian, some are owned by pimpy type dudes, some have a criminal element and some are owned & run by absolute f9cking narcissistic lunatics

The one thing that all agencies have in common is that the escorts on the books of the agency don’t have to answer calls, emails, pay for ads or deal with the untold number of timewasters that can occur when you are an independent

If I wasn’t able to answer my calls or my emails it didn’t matter as my agency was.  They were answering calls 10am until 1am so when I was working or sleeping or taking a holiday, they were making arrangements so I didn’t lose out on bookings and financially it just made sense

Sure they took a fee but without them, I would never have had the booking at all

I used the same name and photos for both independent and agency.  www.Captain69.co.uk has a very useful alias link for clients so my website and agency were linked.   I found that gents never cared whether they booked me thru the agency or with me directly as long I showed up as arranged

Some preferred to speak to me directly but 80% could not have cared less. Many booked thru my agency the first time and subsequent meetings directly with me.  They liked the security of booking with an agency so if something went wrong there was someone to go back to, complain and hopefully get compensation

In around 2006 one of my favourite advertising sites started in London; now there are over 10,000 escorts listed; Independent escorts and agency escorts co-exist on LondonEscortGuide.com (LEG) Ladies can be are listed on LEG under their agency as well as on their independent page

Atlantic has been arranging International Tours since 2004 and we found most countries have the same classifications; independent and agency

That was until we got to Australia…

It wasn’t long before we learnt that Australia has ‘privates’, not independents and agencies have a terrible reputation

From people I have chatted with it seems in the past agencies in Australia had a bad reputation for fake photos, bait & switch and generally being shit, shonky & charging high fees to escorts

Rather than use the word ‘agency’ there is Private page managers, profile Managers, Managed ladies, ladies with booking assistants, ladies with PA’s & EA’s & my recent favourite a lady with a  ‘client-provider’

During the course of the interview, I asked ‘how do you find taking your own calls in Australia?’

She said “I have never taken a call I don’t do that, yuk”

So I got nosey lol

I said “As a private don’t you take your own calls?

She said “no my manager does”

I said ‘do they answer a booking assistant or as you?’

At another interview, a lady told me her Agency managed over 10 private escorts.  All the girls are text only with private profiles on a well known website. The receptionist was often quite busy so the girls would help with the texts while they waited in the office for bookings to come in.

She said it was annoying because she often got sent on kinky bookings when she is vanilla and doesn’t do any kink at all  She wanted to join us because she was sick of getting bookings that weren’t right for her, lying to clients & paying 40% to an agency that only did SMS bookings.  She said it was too much for doing so little….

By excluding Honest Agency Advertising on the ‘private only’ sites the ‘faux private’ has prospered and these advertising sites don’t care, it’s more money in their bank accounts. Just as long as you don’t ruin their advertising spiel….

Recently we had a lady forced to stop working with us because an ad site told her that she can’t be private and be on the Atlantic website as well. She was told if you work with an agency as well you aren’t independent. LOL. (Blog: Forced to Choose)

An independent woman can’t choose to earn from 2 revenue streams (which makes sense right?) and wasn’t the whole reason behind the whole ‘private’ movement to stop agencies controlling girls? Now ad sites can do it instead…

If we don’t care if the lady is promoting herself, taking all her own calls, emails etc & also accepting appointments from Atlantic, then why does an advertising site that makes revenue from advertising care?

I could stop all the disdain we receive for being an agency by closing our Australia site and becoming a ‘booking service’ but that just seems silly. Atlantic is known for representing great girls and our reputation keeps our ladies bills paid

A quality Escort Agency is honest with both clients & escorts

If a client phones Agency Atlantic they know they are speaking to a receptionist and questions can be answered without feeling uncomfortable.  A client also has someone to come back to if the time they spent with the escort is unsatisfactory

At an Escort’s interview, we discuss their needs and also clearly discuss the cost involved to work with us; what is included for that cost & also how we work on a daily basis

Ladies decide for themselves if they wish to work with us and they can leave any time they wish.  We do not approach ladies, force them sign up with us or make them stay.  We provide a lot of service for our fee & work hard & long hours to make sure our ladies are successful

Our ladies don’t spend their days on twitter or being harassed on the phone by timewasters; they attend their escort meetings focused on the client not stressed by their latest stalker or whatever.  For ladies and gents, an Escort Agency offers an additional layer of privacy

Ready to Elevate your Business?

We can assist with all your Digital Marketing & Business Needs

Subscribe to Our Newsletter & Keep Up With Our Latest News